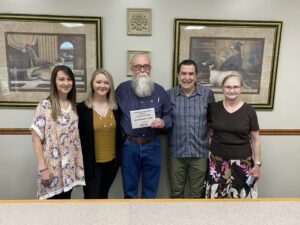 MVMA President Ed Migneco, DVM, nominated Meadows for the Honor Roll. The induction ceremony was held April 23 Missouri Veterinary Museum. During the event, Migneco shared a few words about his nomination of Meadows.

“When you’re talking about teaching, there is us, and then there is Dr. Meadows,” said Migneco. “He sets the bar really high in veterinary medicine. He’s the cream of the crop.”

Meadows says he is grateful of the nomination and induction into the Honor Roll. “I am most pleased to be inducted into this prestigious group,” he said. “Looking at the list of previous inductees, it is quite humbling to be included. That list, unsurprisingly, includes many MU CVM faculty members and other colleagues who I am pleased to count as friends. To be nominated by an excellent veterinarian, friend and current MVMA president, Dr. Ed Migneco is just icing on the cake.”

Meadows shared his passion for the teaching profession. “Teaching is pretty cool,” he said. “If you don’t get a kick in watching that light come on in a student’s eyes, I don’t know what’s wrong with you.”

The Missouri Veterinary Medical Foundation supports the charitable and educational activities of the MVMA. The foundation focuses on public education and animal welfare issues to further the health of animals in Missouri.