John and Susan Warshawsky have not lived in the Show-Me State — or Columbia — for decades, but they have not forgotten that they are Mizzou Made. 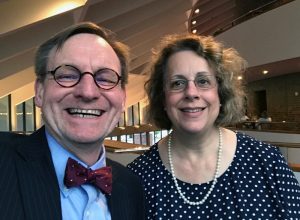 John and Susan Warshawsky became acquainted with the MU College of Veterinary Medicine when they were students at Mizzou in the early 1980s and took in a cat that needed medical care. They have continued to support the college with a monthly gift.

“While my wife and I have been away from Missouri for more than three decades now, we very much consider ourselves products of Missouri,” says John Warshawsky, speaking from his home in Baltimore, Maryland.

John and Susan were St. Louis kids, children of fathers who worked for McDonnell Douglas, an aerospace and aviation giant then based at Lambert Airport. Their fathers worked in the same office, but their children didn’t meet until they were University of Missouri students in the mid-1970s.

“I got an accounting degree in ’77,” Warshawsky says. “And, I met my wife in the accounting program; we were both accounting students. So, I got two good things out of that.”

They married in 1979, the same year they returned to Columbia, so John could attend MU’s School of Law.

During that time, Stanley entered their lives.

“We had moved into an apartment where there was this cat, who was kind of the apartment-complex cat,” Warshawsky says. “He lived on the street and just kind of bounced from unit to unit; he didn’t live with anybody in particular. In my second year of law school, I was selected to be the managing editor of the law review the next year. It was a great experience, but a lot of work. I was coming home late, like 2 or 3 in the morning. This was probably February or March of ’81, and it was really cold. The cat was out there, so I invited the cat to come in and spend the night with us. We let him out the next morning because, again, he was the complex’s cat. But, he became a nighttime visitor to our apartment. 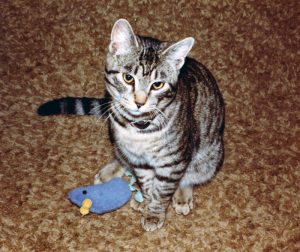 Stanley was the Warshawskys’ first cat. They made their first gift to the CVM in his memory when he passed away in 1994.

“We lived on the second floor,” Warshawsky continues. “One evening, Susan was home at the time, that little cat dragged himself up the stairs to our apartment. He had been injured somehow. We don’t know if he was hit by a car, or what, but the ball-and-socket joint of one of his rear legs had been shattered.

“We were very attached to that cat, so we took him to the emergency facility at MU’s College of Veterinary Medicine,” Warshawsky remembers. “They stabilized him, cared for him, and we footed the bill for that. Once that happened, the cat became ours. That began our interest and close affiliation with the College of Veterinary Medicine, because they were there for us when our cat needed care, and they took very good care of him. That’s also when we decided that Stanley was going to be an indoor cat.”

Stanley was later joined by Ernie, a cat adopted from what is now the Central Missouri Humane Society. After John graduated from law school in 1982, he, Susan, Stanley and Ernie moved to Washington, D.C., with John working as an attorney at the U.S. Department of Justice, and Susan as an accountant at Georgetown University.

“The first gift we gave to the College of Veterinary Medicine was when Stanley passed away in 1994,” Warshawsky says. “Cats have been a very important part of our lives, and Stanley was our first cat, and our first cat to pass away. Our lives were so much richer because of Stanley, and we knew that it all started for us with the College of Veterinary Medicine. If they had not been there, Stanley would not have been with us. So, we made a gift to the veterinary school in Stanley’s memory. Then, we got into the habit of making annual memorial gifts for Stanley and, later, Ernie, and it just kind of took off from there. We eventually wanted to make gifts on a more regular basis. We now donate monthly to the CVM.”

After Stanley and Ernie passed away, new companions joined the Warshawskys: Max and Juma.

“Ruby is our third-generation cat, and she doesn’t want to live with anybody else, so she has the condo to herself now,” Warshawsky says. “She had been a two-time loser, from what we understand. She was rescued on the street in downtown D.C. When they picked her up, she’d already been spayed, so they knew she’d had a previous owner. She has landed well this time.”

As it turns out, John was not just a lover of cats. He was in love with the city of Baltimore.

“Baltimore’s a city with a lot of character,” Warshawsky says. “It has some obvious issues, but there’s a lot to love about it. We lived in D.C., and in Bethesda, Maryland, which is just outside D.C., for a little over 30 years. I had really been working on Susan for a number of years to get her to move to Baltimore. I was finally able to close the deal when I told her she could retire as soon as we moved to Baltimore. So, we moved here in January 2018, and she got to retire. She’s enjoying that quite a bit.”

Yet, relocation — even one as cheery as this one — can have its challenges. 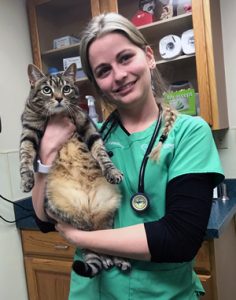 When the Warshawskys relocated to Baltimore, Maryland, in 2018 they searched for a new veterinary clinic to provide care for their cat, Ruby. They chose a practice with a CVM alumna on the team, Amelia Kaeding, DVM.

“When we moved to Baltimore, we had to get new healthcare providers,” Warshawsky says. “The same was true for Ruby. We checked out a few veterinary practices. We were very impressed with Falls Road Animal Hospital. Falls Road is a very solid practice, with 24-hour emergency care, and it’s not that far from us, so it was an obvious good choice. That’s where we met Dr. Amelia Kaeding, a graduate from MU’s College of Veterinary Medicine. When we found out they had a Missouri graduate, we just had to go with Dr. Kaeding.”

“It was really cool, getting to know the Warshawskys, and connecting with some other Mizzou alums in our area,” Kaeding says. “It was amazing how they researched area veterinary practices, and that part of their criteria was whether there were any Mizzou alums on staff. It’s fantastic how much they care about the vet school, and how they do so much to contribute to its mission and future.”

There can be little doubt that the Warshawskys remain true to their school.

“We are so appreciative of what the University of Missouri has done for us over the years, what it has made possible for our lives, and we’re very appreciative, obviously, of the vet school,” Warshawsky says. “Toward the end of Stanley’s life, he developed a condition that was something like an inflammatory bowel issue. Mark Hitt was the veterinary specialist who cared for him. Dr. Hitt had done a residency in veterinary internal medicine at Missouri in the ‘80s. When our cats have needed care, we’ve been able to get them the care they needed. It all starts with a great veterinary school that can produce really excellent doctors.

“So, we want to keep supporting all of the good things the College of Veterinary Medicine does; that’s why we make monthly gifts. We don’t give enough that they’re going to name a wing after us,” Warshawsky says with a laugh. “But, by the same token, we are happy we can make a donation to the vet school on a regular basis.”

Mizzou Giving Day will be held from noon March 13 through noon March 14, 2019. Giving Day will include a variety of challenges between schools and colleges within the MU system. You can join the Warshawskys, and go all in to support the Veterinary Health Center’s lifesaving work or other College of Veterinary Medicine needs by making a gift of your own.

The University of Missouri Veterinary Health Center is recruiting dogs with cancer for a new clinical trial that is being conducted in partnership with the National Cancer Institute.