Every species requires a beating heart to live, and that heartbeat must maintain a certain rhythm to perform its vital task. Since the 1960s, pacemakers have controlled abnormal heart rhythms in humans. In the 1980s, veterinary cardiologists began using pacemakers in canine patients.

“There is actually no difference between human and canine pacemakers,” says Stacey Leach, DVM, an assistant teaching professor and researcher at MU’s College of Veterinary Medicine. “We use the same equipment, the same technology. Oftentimes, the appliances we use for our canine patients are essentially human-grade equipment that was donated to us.” 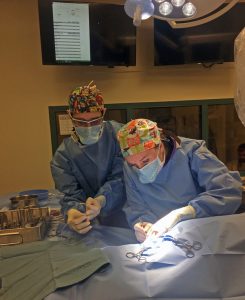 Kelly Wiggen, DVM, cardiology resident at the Veterinary Health Center, and James Karnia, DVM, radiology resident, implant a pacemaker that was donated from a human patient in a 10-year-old dog. The dog was found to have an abnormally slow heart rhythm, which left her vulnerable to sudden death. She also needed surgery for another condition, but couldn’t undergo the procedure until her heart rhythm issues were corrected.

Medical equipment companies sometimes make these donations, because the units have exceeded their shelf life for use in human medicine, or because newer models are ready to enter the marketplace.

“We also receive — and encourage — donations of pacemakers that have outlived a patient, whether that patient was a dog or a human,” Leach says.

Pacemaker donations help keep costs down for veterinary clients, and allow the donor to leave a healing legacy of life for someone’s canine companion.

“We get our pacemaker supplies from a multitude of sources,” Leach says. “There are some veterinary-specific companies that make generators and leads for purchase, but those are fairly expensive. We try not to buy brand new ones, because that cost has to be passed on to our patients, and that can be cost prohibitive.

“We welcome pacemaker donations,” Leach says. “We can refurbish those and pass the savings on to clients. We understand that many of our clients may not have a ton of money, but have plenty of love for their pets.”

As one of the few hospitals with the facilities and expertise to perform pacemaker implantation, MU’s Veterinary Health Center is the primary referral area for Missouri and some surrounding states.

“Being one of the few centers around here that provide pacemaker surgeries, we see clients who drive all the way from Oklahoma or Arkansas,” Leach says. “We’re one of the few facilities that offers this type of work, and we’re the only one that offers 24-hour care with potential pacemaker implantation on an emergency basis.

“We have access to great equipment, all of the supplies for any of the pacemakers we could want to use and all the equipment to run, operate and program those pacemakers,” Leach continues. “We have the staff that supports it, the building and the materials that offer these kinds of procedures.

“I think these interventional and minimally invasive procedures are things that set our hospital apart from most veterinary hospitals in the state, and even some surrounding states,” Leach says. “What we can provide is something unique that just isn’t out there, let alone available 24 hours a day, every day of the year.”

Conditions that call for a pacemaker

“With cardiology in general, most of what we do is essentially medical cardiology,” Leach says. “We diagnose cases and come up with treatment plans based mainly on medications. There is a small facet of cardiology, however, that requires certain interventional procedures — basically, minimally invasive surgery. Pacemakers fall into that category and are one of our more common procedures.

“The primary reasons we place pacemakers are disturbances in the heart rhythm, where the heart is pacing too slowly on its own,” Leach says.

“The vast majority of our patients get diagnosed because they either have symptoms of weakness or collapse, so their owners take them to see their primary care vet, or an unusually slow heart rate is noted as an incidental finding for a routine checkup,” Leach says. “The diagnosis that they need a pacemaker is usually made before they come to see us.

“In middle- to older-age dogs, there is degeneration and scarring that can occur in the heart that causes disturbances in the electrical pathways,” Leach says. “Without putting a pacemaker in to get their heart rates back up, some of these dogs are at risk for dying suddenly, where their heart eventually stops altogether. Some of them will go on to develop heart failure over time, as their heart tries to work harder and harder, but just can’t contract faster than it already is. Pacemakers reduce the risk of sudden death, reduce the risk of developing heart failure and improve their potential symptoms. A lot of these dogs, with their heart rates so low, cannot exercise, are severely fatigued, have exercise-induced weakness, or collapse — what we call syncope, or fainting spells. The pacemaker helps alleviate the symptoms and reduce their risk of sudden death and heart failure.”

The pacemaker and the procedure

Pacemakers consist of a generator, containing the battery and a microcomputer, and the lead, an insulated electrical wire with an electrode at the tip that connects the generator to the heart. Contrary to a widely held belief, the pacemaker does not take over regulation of the heartbeat on a constant basis. The device monitors a patient’s heart rhythm and uses low-energy electrical pulses to stimulate a heartbeat when needed.

“There’s a lot of technology behind the pacemakers,” Leach says. “The pacemaker itself is able to make an intra-cardiac electrocardiogram, or EKG, recording; essentially recording what’s happening inside the heart, constantly checking the heart rate and rhythm, and determining whether the pacemaker should take over or not. It sends a small electrical impulse every time it detects that the heart rate is too slow.

“Pacemaker implantations are generally a minimally invasive procedure, requiring just a skin incision in the neck to access the jugular vein. Then, we make a very small nick in the jugular vein in order to feed the lead down into the heart,” Leach says. “We’re actually able to watch what we’re doing with fluoroscopy — a real-time, moving X-ray of the heart — so we can make sure that we have it in the right position inside the heart. We keep testing it until we find the ideal spot. Once we’ve secured the lead, the battery itself gets implanted into another incision that’s maybe two inches long at most. This is all beneath the skin of the neck; there’s no chest cavity opening.

“It is a procedure, so there are small skin incisions that have to heal. We usually have the patient come back 10 to 14 days after the procedure, either with us or their primary care veterinarian, to ensure that the incisions have healed and to remove the sutures,” Leach says. “We usually recheck them three months after the initial surgery to make sure the pacemaker is still positioned correctly, to check the battery and the function, and to make sure the settings are still appropriate for the patient. After that three-month recheck, we recommend checking them every six months for the rest of their life. We’re always checking to make sure the pacemaker has adequate battery life, adjusting the settings to make sure the unit is optimized for that patient and working appropriately, and to make sure it doesn’t burn through the battery too fast.

“We also continue to monitor the size and function of the heart itself, to make sure it is still mechanically doing the job, even if the heart rhythm is healthy,” Leach says. “We want to know that the electrical and mechanical aspects of the heart are still working correctly.” 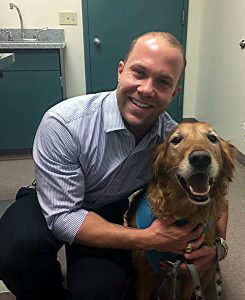 “The pacemaker cases in particular are pretty rewarding because they start with an animal that just feels really bad, or is very symptomatic, even collapsing,” Leach says. “We had one patient that was collapsing every five minutes, and we were able to offer a quick fix: put a pacemaker in there, turn it on and within seconds you know whether it’s working or it’s not. Then, it’s not long before these guys can feel really good and go on to live a normal life.

“One of my favorite patients is Duke, whose full name is Duke Dizzy Dog Baby Heffington. He’s friends with me on Facebook,” Leach relates with a smile. “Duke still comes back every six months for his rechecks, and he always checks in on Facebook that he’s here when his parents bring him in.

“He came in on emergency and his owners were debating whether or not they should approve a pacemaker for him. He was an old dog and they weren’t sure how much longer he had left, so we spent a lot of time talking about the pros and cons, the risks and benefits of a pacemaker,” Leach recalls. “They ultimately decided to take a chance on it. Here we are now, almost five years later, and he’s still doing great. He has more energy than puppies would have. He’s a perfect example of a dog we can help with a pacemaker, who can go on to live a normal life. He works as a greeting dog for their optometry business in Springfield.”

The circle of life

“Within the cardiology community, there’s an organization that serves as a repository for donated pacemakers, but there are so many cardiologists worldwide who are doing this procedure that they are very nearly always sold out,” Leach says. “So, unfortunately, we are becoming increasingly dependent on people donating pacemakers directly to us, or purchasing brand new pacemakers, which can run several thousand dollars for the entire setup.

“Most of our donations come from family members who were told by a loved one who had a pacemaker that they wanted to donate it to us whenever their time came,” Leach says. “So, their surviving family gets in touch with the doctors and care team to make sure that happens, but it’s important that the medical team knows in advance that donating the pacemaker is something they’d like to do.

“Some of the pacemakers we put in our veterinary patients will outlive the dogs,” Leach continues. “Since we already have a relationship with them, our long-term clients will often ask if they can donate the pacemaker to another dog in need.

“Most of our donations are going to come from family members who know that their loved ones wanted to donate that pacemaker, but a lot of people just don’t realize that it’s even an option,” Leach says. “The biggest problem is just letting people know we can do that. Otherwise, perfectly usable pacemakers are just thrown away when they could be used to benefit another animal.”

To arrange a pacemaker donation, or for more information, contact cardiology veterinary technician Alyssa Ingerson at (573) 882-7821. To make a monetary gift, visit www.giving.missouri.edu, or mail checks, indicating Cardiology Department on the memo line, to:

John and Susan Warshawsky have not lived in the Show-Me State — or Columbia — for decades, but they have not forgotten that they are Mizzou Made.

The University of Missouri Veterinary Health Center is recruiting dogs with cancer for a new clinical trial that is being conducted in partnership with the National Cancer Institute.