When Ronnie, a 2,000-pound draft horse owned by an Amish family in Clark, Missouri, started having trouble breathing, he was taken to the University of Missouri College of Veterinary Medicine. There, equine veterinarian Joanne Kramer surgically created a hole in the horse’s windpipe to help him breathe easier and bypass a permanent airway obstruction.

However, there was still an issue holding Ronnie back. He was a working horse and needed to be in top physical shape to meet the demands of his daily farm tasks.

“After the tracheotomy, Ronnie was just fine walking around, but he had some extra skin around the hole in the windpipe that kept flapping into the hole when he was out on his family’s farm plowing the fields, causing him to tire very easily,” said Kevin Keegan, a professor in the College of Veterinary Medicine that oversaw Ronnie’s recovery. “What we needed was some type of device to put in the windpipe hole that would allow air to come in while still blocking out the extra skin, dust and bugs.” 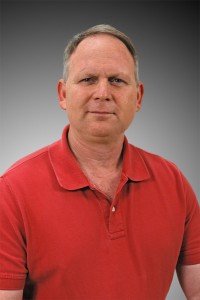 Kevin Keegan is a professor in the MU College of Veterinary Medicine.

So, Keegan teamed up with two undergraduate students in the MU College of Engineering, who are also members of MU’s 3D printing club. The collaboration resulted in an innovative solution that highlights the power of precision medicine, one of the key cornerstones of the NextGen Precision Health Initiative.

“We created a device using thermoplastic polyurethane filament, which is a flexible material,” said Holly Anderson, a senior from St. Louis majoring in biomedical engineering. “Most filaments tend to be much harder and stiffer, but we needed something we could squeeze into the horse’s trachea that wouldn’t crack or deform over time.”

After the first prototype was created, Keegan and the students tried to schedule a meeting with Ronnie’s owner, but that turned out trickier than expected because the Amish traditionally do not use cell phones or other forms of technology.

A woman who serves as an intermediary between the Amish community in Clark and the general public was able to help Keegan and the students arrange a time for the visit. But soon after arriving on the farm, they realized the device was too big for Ronnie’s hole in the windpipe.

“So, we knew we needed to make some adjustments,” said Griffen Mustion, a junior from Springfield, Missouri, who is majoring in biomedical engineering. “I stuck my fingers into the gap of the horse’s throat to see how deep it was, and then we went back to the 3D printing lab to make some tweaks to the device’s size, height and depth.”

Eventually, the students found the perfect balance between making the device stiff enough to stay in place, but flexible enough to bend and expand to the right fit. They returned to the Amish farm and successfully inserted the device into Ronnie’s trachea, which drastically improved his breathing and allowed him to resume his farm duties with the rest of the draft horses.

“This was a great opportunity to combine my passion for 3D printing with an opportunity to help a patient,” Anderson said. “I’ve always been interested in how prosthetics can help in the area of biomedical engineering and being able to improve the health of Ronnie the horse was pretty cool, too.”

Mustion added that while the patient was a 2,000 pound horse in this case, the project showcased how 3D printers can be utilized in precision medicine to help animals or people with various health issues.

“3D printing allows you to customize your product so that it fits the patient perfectly,” Mustion said. “With rapid prototyping, you can make tweaks until the product is how you want it, and that ties into precision medicine because we want to design solutions for patients that meet their needs exactly.”

Keegan, who has been an equine veterinarian at MU for the past 30 years, has recently been contacted by a horse owner in Texas with a similar problem to Ronnie’s, and the team is now collaborating on another custom device to see if they can help.

“I think this project showed that custom devices for each animal are the way to go moving forward,” Keegan said. “Rather than a one-size-fits-all solution, we can measure the hole in each horse’s trachea after the tracheotomy and 3D print a prototype to see if the device fits. I’m just doing my job, but it was a team effort, and I am happy to help.”