On March 22, 2021, David Green and his dog, Lucky, embarked on the trip of a lifetime. The pair, along with Chris Genoversa, the appointed crew chief, set out to trek across the United States, from Jacksonville Beach, Florida, to Sacramento, California, where Green would visit his 104-year-old grandmother, and finish at Muir Beach, California. Green would run 3,400 miles from the Atlantic Ocean to the Pacific Ocean. In his blog, “Running Across America,” Green wrote, “The journey will not be about breaking records, rather for me it is about seeking personal enlightenment through exploring limits, reconnecting with friends and country, and inspiring anyone to chase big dreams while we still can.” 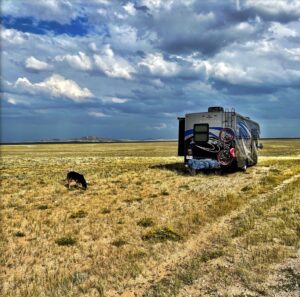 Lucky next to the parked RV in Wyoming.

Green, a retired entrepreneur, resides in Jacksonville Beach, where he trains as an endurance athlete in his free time. While many people hope to strike a marathon off their bucket list, Green has run in numerous races, including an estimated 50 ultramarathons, races that span a distance of 30 miles or greater, and about 20 Ironman races, triathlons that include 2.4 miles of swimming, 112 miles of biking, and a marathon to conclude the race. With all of these events in his repertoire, Green said he was looking for new adventures. “I’m now looking for experiential journeys that happen to be ultramarathon related,” said Green. “I like doing these things. It gets me out into the world with people, and not so long ago it got me out into the world with Lucky.”

Lucky, a mostly brown and black mixed breed dog, met Green in the most uncommon of circumstances. In 2018 Green was in Brazil to would run the Caminho da Fé, a 364-mile pilgrimage to the Basilica of the National Shrine of Our Lady of Aparecida, in São Paulo. Along the trail, Green and his group ran through rural areas receiving a stamp toward completing a pilgrim’s passport each time they encountered a village church along the way. According to Green, there were hundreds of street dogs in impoverished areas along the route. In a town they were passing through, one of those dogs followed them. In the heat of the Brazilian summer, the dog ran alongside the group for 12 hours. 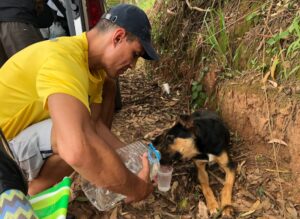 David provides Lucky with some water during their initial run in Brazil.

Green, who was nursing painful blisters on his foot, reached a village with an ambulance that would treat his wounds. It was at this point he lost the dog that had been following him for so long and thought he’d never see him again. “I climbed into the ambulance and asked them to dress my wounds,” said Green. “I thought that was the end of the dog. He’d followed me for 12 hours, we had a good time together, but there are tons of dogs out there.”

Little did Green know that the dog would reappear that night five hours later at the top of a mountain. “I was trying to catch the group that left me, and I was sitting down to rest,” he said. “This dog came out of the clearing and had followed me from the village. I called my wife in the United States, and she told me to bring him home.”

Green located a veterinarian in Brazil who assisted him in finding a way to transport the stray to the United States. From that point, Green made his way back to Florida and a few days later he received a phone call saying that the dog he would name Lucky had arrived at the Jacksonville airport for pickup. 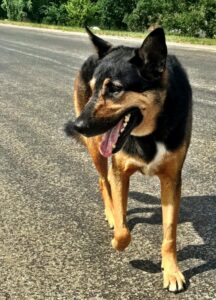 Lucky running along the road, as he would every day with David.

Three years later, man and dog began their run across America, but quickly had to stop due to a stress fracture in Green’s right leg, which caused them to return home. During this time Green learned Lucky had developed lymphoma. While Green’s leg healed, veterinarians were able to treat Lucky and put his lymphoma into remission. The pair began running again and Green decided to resume the cross-country trip, along with his crew chief who trailed in an RV. “Lucky had his ups and downs regarding appetite and fatigue, but his heart was always there in the morning when it was time to go out and run the open road,” he said. “We would start every morning together going around 15 miles before he would look back at me, nodding that it’s time to ride in the co-pilot’s seat for the rest of the day.”

Along the planned trail, they scheduled appointments for Lucky to receive chemotherapy treatments, once a week, throughout the country. “Running across the country itself is very complicated from a logistics perspective but layering in having to deal with chemotherapy once a week was just another massive logistical issue,” said Green. “Primarily because I didn’t realize this, but everything in the middle of the country is not the same as it is on the coasts. It’s one thing to have an oncology center in Jacksonville, but the second we got into Georgia and the Midwest they were few and far between.”

Through their research, the group was able to locate a suitable facility for Lucky’s treatment wherever they went. One of those stops was the University of Missouri Veterinary Health Center. In Columbia, Lucky was given chemotherapy to treat the cancer in his colon, liver and lymphatic system. Oncology residents Kaitlin Hovis, DVM, and Lauren Ross, DVM, and the Oncology Service technicians treated Lucky multiple times, as the crew would drive several hours to the CVM, drop off Lucky, return to where Green finished running the previous day, and continue on the trail.

The trek continued throughout the United States, covering a total of 12 states. Unfortunately, on Aug. 24, in Wyoming, Lucky’s incredible journey came to an end. As they walked out of the RV that morning, Lucky stepped out, stopped, looked at David for the first time and didn’t want to go. He took Lucky to a veterinarian in Farson, Wyoming, where they decided, with second opinions from Mizzou and Colorado State University, that the spread of cancer made euthanasia the only option. On his final journey, Lucky had traveled 2,300 miles. 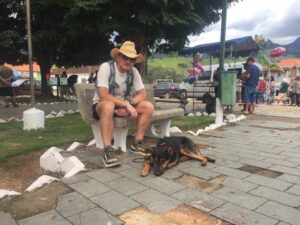 David and Lucky resting in a Brazilian village after completing their run Caminho da Fé.

Over the next month, Green and his crew chief finished the run arriving at their planned destination of Muir Beach. Green says he learned many lessons during the experience. “When you put yourself out into the world, you learn that there is greatness in every person and creature out there,” he said. “They just need an opportunity to shine, and I saw that in a street dog, who ended up being one of the greatest things in my life.”

Green also spoke of his appreciation of all of the veterinarians who assisted Lucky along the way. “Honestly, it chokes me up,” said Green. “Every time there was an issue they were there. Even on a Friday night, when we found out that Lucky was no longer in remission, Dr. Ross called me after hours and was able to help me make decisions and provide support. MU is exceptional, but the passion is in most every veterinarian I came across, and for that, I am eternally grateful.”