What is a fungus? 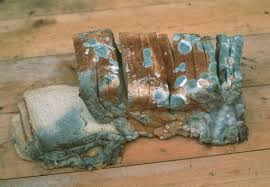 Bread mold is an example of a commonly encountered fungus, but bread mold does not cause systemic mycosis.

A fungus is a living organism. It goes through a complicated life cycle and is able to spread in the environment by producing large numbers of spores that are easily dispersed by wind and other elements. Some fungal spores mature in the environment to hyphae, which can produce more spores, or, in the right conditions, can mature into yeast forms. Fungi, like the mold you find on an old loaf of bread or the mushrooms in your backyard, are everywhere in our environment. Like bacteria, fungi can infect our pets. Unlike bacteria, fungal infections can’t be treated with antibiotics, but instead require a class of drugs called anti-fungals.

What is a fungal disease?

Fungal diseases may be confined to a body surface (for instance, ringworm is caused by a fungus), or they may become systemic (meaning spread through body systems). Systemic fungal disease, also known as systemic mycosis, is characterized by entry of a fungal organism into an animal and subsequent spread to various organs of the body. Fungi (plural of fungus) can go anywhere in the body, but each fungal species has preferred locations, such as the lungs, eyes, or lymph nodes. The types of fungi that most commonly affect our pets are abundant in the soil and tend to adhere to certain geographic locations.

How does my pet become infected with a fungal organism?

However, any dog or cat of any age can develop one of these infections.

Typically, fungal spores within the soil are inhaled by the pet, but it is also possible for the spores to be ingested or to enter via an open wound. By any route, the fungal spore gets into the body, is converted to its yeast form, and is often spread systemically via the blood circulatory or lymphatic systems.

What are some common systemic fungi that can affect my pet?

While there are many know strains of fungi, there are a few that most commonly cause systemic disease in pets. Three of these potentially pathogenic (i.e., disease causing) fungi include Histoplasma capsulatum (causes histoplasmosis), Blastomyces dermatitidis (causes blastomycosis), and Coccidioides immitis (causes coccidioidomycosis). 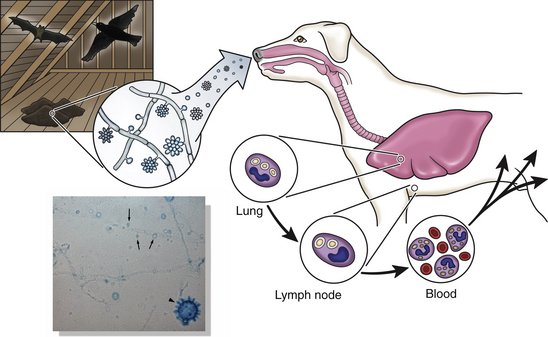 Histoplasmosis, caused by a fungus by the name of Histoplasma capsulatum, is one of the few fungal diseases that affects cats in a higher proportion than dogs. Histoplasmosis is a Midwestern disease, affecting pets residing in and around the Mississippi River Valley. After inhalation of H. capsulatum spores, the spores are converted to yeast in the lungs where they replicate, get into circulation inside blood cells, and spread throughout the body.

Clinical presentation can look quite different between cats and dogs. In dogs, common clinical signs can involve the gastrointestinal tract. Diarrhea, bloody stool, and weight loss are all common presenting complaints. Dogs can also have respiratory signs, as the lungs are often targeted as well.

Cats, however, don’t commonly present with bloody stool, but will show signs of respiratory disease (cough, increased respiratory rate, difficulty breathing), weight loss, or anorexia. In both cats and dogs, histoplasmosis can target essentially any body system, so lymph nodes, eyes, bone marrow, and liver can also be locations for possible disease manifestation. Itraconazole is the treatment of choice for both cats and dogs with histoplasmosis, though amphotericin B can used if the fungus is altering normal GI function.

Blastomycosis, caused by Blastomyces dermatitidis, tends to affect dogs more than cats. Blastomycosis is most common in the Ohio River Valley (east of the Mississippi River). B. dermatitidis exists in spores in the soil that are inhaled, travel to the lungs, and are converted to the yeast phase in which they can spread. Blastomycosis tends to stay more local than other fungi, so respiratory signs such as coughing, increased respiratory rate, and increased respiratory effort are commonly noticed. Blastomyces also commonly invades lymphatics, so lymph node enlargement is also a common sign, and affects the eyes causing redness or even blindness. More systemic effects are possible, with the eyes, bones, or skin affected frequently. Usually, either Fluconazole or Itraconazole are chosen for treatment. 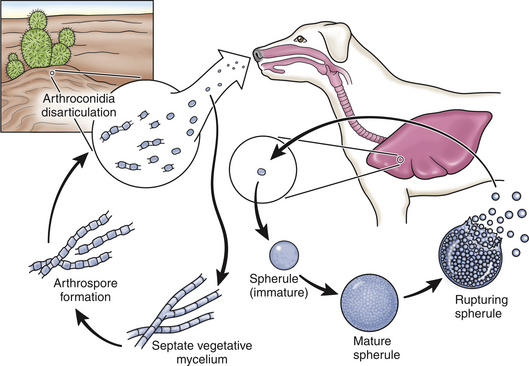 Coccidioidomycosis, or “Valley Fever,” predominantly affects dogs and is caused by Coccidioides immitis. C. immitis is typically found in the soil of the Southwestern United States. Spores are brought to the surface after heavy rainfall and are inhaled by the host. It is common for spikes in pets affected by C. immitis to occur in the years following increased rainfall totals. After the organism is inhaled, it is disseminated to the lymphatics, bones and other organs systemically. Clinical signs commonly seen in dogs with with coccidioidomycosis include cough, difficulty breathing, weight loss, enlarged lymph nodes and seizures. Itraconazole can be used to treat non-life-threatening coccidioidomycosis.

How does a pet get diagnosed with a fungal disease?

There are a few means by which your vet can diagnose fungal disease in your pet. Ideally, the fungus can be seen under the microscope; good samples to examine include lymph node aspirates, touch imprints from skin lesions, or fluid obtained by washing the airways. Each fungi can be identified by defining features in this way. H. capsulatum, the causative agent of histoplasmosis, is often described as small, rounded, and surrounded by a halo; these are found inside of cells. B. dermatitidis, on the other hand, is larger and defined by its broad-based, budding yeast forms in tissues.

Another way to diagnose pets with systemic fungal infections, like coccidioidomycosis, is to take a blood sample and send it to a laboratory for serologic (a component of blood) testing. Results will indicate if your pet’s immune system is fighting a fungal infection. Another method of diagnosing and monitoring fungal disease, is by urine antigen test. Your vet will obtain a sample of urine from your pet and send it off to be tested for evidence of fungus. This same urine test can also be used to decide if a previously diagnosed disease is resolving with treatment, based on the level of antigen in the sample.

What kind of treatment options are available?

It is important to know that treatment of fungal disease is an investment. Antifungals are often expensive and fungal infections require a long course of treatment. It is important to consult with your veterinarian about what fungal treatment is right for your pet. Though the drugs act by different mechanisms, the goal of many of the most commonly used antifungals is the same — damage the integrity of fungal cell wall. Mechanistic differences between antifungals allows veterinarians to cater therapy to your pet’s needs, based on diagnosis and control of disease.

Itraconazole is perhaps the most commonly used antifungal veterinarians reach for in light of a diagnosis of systemic fungal disease. Itraconazole is an oral medication useful in treating pets with histoplasmosis, blastomycosis, and a variety of other fungal infections. It is expensive, but unfortunately, the generic versions tend to not work as well as the real thing. Your veterinarian may be able to help you find ways to reduce the cost through coupon programs or writing prescriptions that can be used wherever the drug is least costly. If you do use the generic drug, your vet may want to do additional testing to be sure it is working the way it should.

There are other drugs that act by the same mechanism as Itraconazole. Fluconazole is a similar oral antifungal that is often indicated when the fungal infection has invaded the eyes or central nervous system. It is less expensive than Itraconazole, so it can sometimes be used in place of the more costly drug. Voriconazole is a pricey, but efficacious drug that treats many fungal infections and may be used as a last line of defense by your veterinarian.

In a completely different class of antifungal drugs is a drug called amphotericin B. It is a more intensive drug, as it has more serious adverse effects and, therefore, must be more carefully monitored. Amphotericin B can be administered subcutaneously (under the skin) or, ideally, intravenously (through the vasculature). Because amphotericin B has the propensity to cause severe kidney damage, it typically requires hospitalization and strict monitoring of kidney values to check for toxicity. Intravenous injections with amphotericin B require administration every other day over the course of several weeks. It may be the best choice for life-threatening infection or when the gastrointestinal tract isn’t working.

Yet another option is terbinafine. It is seldom used alone, but is often added to other therapies for treatment of systemic mycoses. Terbinafine is particularly good for treatment of fungal skin infections like ringworm, as it is absorbed through the gut and travels through the blood rapidly to the skin tissues. This antifungal is a less expensive drug your veterinarian may prescribe to add to your pet’s treatment regimen.

Your pet’s response to therapy can be monitored in a variety of ways. Bloodwork should be monitored during and after therapy to make sure your pet’s liver and kidney values are within expected ranges. Lymph nodes and clinical signs can be monitored for suggestion of regression or resolution of disease. Repeat imaging can be done to check for improvement in the looks of the lungs. Urine antigen tests are another possible way to monitor disease progress.

What is the end goal with systemic fungal disease?

Ultimately, your pet will be placed on systemic antifungals for four to six months, or longer, in hopes of clearing the systemic infection. The road to recovery is long and expensive, but local disease infiltration often carries a good prognosis. The more invasive the disease, generally, the more guarded the prognosis with standard four- to six-month treatment on one antifungal alone. It is possible that your pet will experience relapses during therapy which will require alteration of the original treatment regimen. With aggressive medical management, many pets can experience a good quality of life with minimal adverse effects and, for many, eventual recovery.

Written by: Moriah Morrison
Edited by: Leah A. Cohn