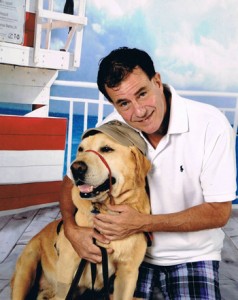 Booster and his owner, Davis Hawn of Mississippi, have been inseparable for 10 years. A trained service dog, Booster helps Hawn with PTSD symptoms stemming from an assault and robbery.

A brutal assault and robbery 10 years ago left Davis Hawn of Mississippi riddled with fear and depression. A roommate had attacked him and stolen his truck. Soon after his vehicle was found, the tow truck company retrieving it discovered an 8-week-old yellow Labrador retriever inside. Hawn reluctantly decided to keep him.

Suffering from post-traumatic stress disorder, he wanted nothing to do with the puppy, whom he named Booster after he stole a toy from a pet shop. Hawn frequently relived his trauma and had become isolated, and he hated the attention the dog brought him. Although he just wanted to be left alone, children frequently approached him to ask if they could pet Booster and play with him.

Hawn was at the lowest point of his life and even contemplated suicide one night. The next morning Booster injured his paw by running into a truck’s trailer hitch. Hawn could see the pain his dog was experiencing, a feeling he could relate to all too well. He held Booster in his arms and comforted him. Their shared suffering forged a deep bond between the pair, and Hawn’s healing began.

“Booster saved my life once,” Hawn said. “I made him a promise that I’d never take him or life for granted.”

Hawn and Booster enrolled in a service dog training program in California. Today Booster helps Hawn with mobility issues and PTSD symptoms. Booster’s skills include getting Hawn water from the refrigerator if he needs to take medication, turning lights on and off, helping Hawn maintain his balance, and jumping and barking if Hawn needs help. Most importantly, Booster provides comfort for the anxiety and nightmares Hawn still suffers from his trauma.

“Booster is my medicine,” Hawn said about his nightmares. “The minute I see Booster in the bed, I know it’s not real.” 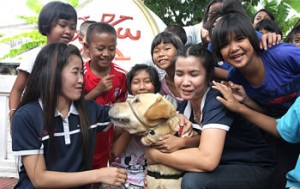 Hawn and Booster have traveled all over the world to teach others about the healing power of dogs. Hawn said Booster has fostered international relations by serving as a “social bridge” in Cuba and comforting children with HIV in Thailand, where this photo was taken.

Hawn and Booster have traveled all over the world to teach others about the healing power of dogs, Hawn said. Among his travels, Booster has fostered international relations by serving as a “social bridge” in Cuba and comforting children with HIV in Thailand, Hawn said. He and Booster even attended Bergin University of Canine Studies, where Hawn received a master’s degree in canine life sciences.

The pair is inseparable, which is why Hawn was devastated when Booster recently began showing signs of a serious illness. He was lethargic, walked in circles and would twitch like he was shivering. His wobbly legs made it hard to get up, and he had become afraid of stairs.

Hawn, who spends his summers in northern Arkansas, visited his local veterinarian, who referred him to the MU Veterinary Health Center.

Booster’s case posed an interesting challenge for the veterinarians and veterinary students treating him. He had been diagnosed in 2013 with squamous cell carcinoma, a form of cancer that attacked his sinuses and skull. Given that history and his neurological symptoms, it seemed likely that the cancer had recurred or that his illness had resulted from the radiation therapy used to treat it. In addition, his extensive travel history raised the possibility of diseases not normally seen in the United States.

Veterinarians and staff from a variety of services — emergency and critical care, neurology, anesthesia, oncology, radiology and internal medicine — collaborated as they raced to diagnose and treat Booster.

“We all worked together on this case, which is one of the benefits of being at a university hospital,” said Booster’s veterinarian, Missy Carpentier-Anderson, DVM, a first-year neurology/neurosurgery resident.

A computed tomography (CT) scan found no evidence that Booster’s cancer had returned. Magnetic resonance imaging revealed meningitis, an inflammation of the membranes surrounding the brain and spinal cord.

Booster’s blood tests showed anemia, low platelets and low albumin, or blood protein. His urine had protein in it, which raised suspicion that an infectious agent might be attacking multiple organ systems. 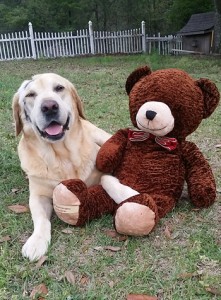 Booster celebrates his recovery from cancer and Rocky Mountain spotted fever by cuddling with his favorite toy.

The combination of neurological symptoms, meningitis and protein in Booster’s urine led his veterinarians to suspect that he had been infected with a tick-borne disease such as Rocky Mountain spotted fever or Ehrlichia. Both can be fatal in humans and animals.

Because of the life-threatening nature of these diseases, Booster’s veterinarians immediately began treating him with antibiotics and anti-inflammatory medications. Booster started improving within 24 hours. When his test results came back, they confirmed that Booster had Rocky Mountain spotted fever.

According to the Centers for Disease Control and Prevention, five states account for more than 60 percent of Rocky Mountain spotted fever cases in humans. These states include Arkansas, where Hawn was living, and Missouri, plus North Carolina, Oklahoma and Tennessee.

Although cancer seemed like an obvious cause given Booster’s history, his veterinarians kept an open mind while seeking a diagnosis, Hawn said. He attributes Booster’s recovery to Carpentier-Anderson’s decision to treat for Rocky Mountain spotted fever even before test results were available.

“Nobody in their wildest dreams would have thought this severe situation was due to a tick bite,” he said, especially considering the fact that Booster was using a tick prevention product. “That’s experience, and that’s the value of an education. Had Dr. Carpentier not done that he wouldn’t be alive today.”

Being from Mississippi, Hawn wasn’t previously familiar with the MU veterinary hospital, but he said the “warm and enthusiastic environment” created by the faculty and staff made a difficult experience more manageable.

“You knew that they were going to do everything they could,” Hawn said. “I knew he was in the right hands.”

Because his and Booster’s mission is to educate people, Hawn celebrated the opportunity Booster had to teach residents and students at the VHC, he said.

Today Booster is back to his usual self. He and Hawn even traveled to Fairbanks, Alaska, and San Francisco recently.

“Booster’s been through a heck of a lot in his life,” Hawn said. “I want to share with the world what this dog has done for me.