You are here: Home / Ophthalmology / Cataracts 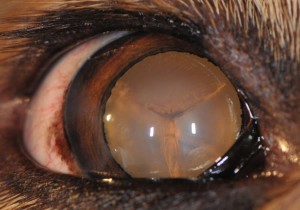 Cataracts are a common cause of blindness in dogs. A cataract is an opacity of the lens within the eye. The lens plays an important role in focusing light on the retina. A cataract prevents the light from reaching the retina, thereby impairing vision. 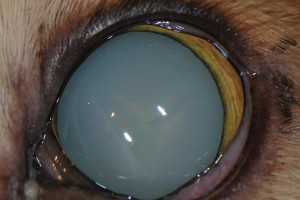 Cataracts are also classified by age of onset; terms such as “juvenile cataract” or “senile cataract” are used by some veterinary ophthalmologists. Cataracts must be distinguished from a normal aging change in the lens known as lenticular or nuclear sclerosis, which causes a bluish appearance to the eye but typically does not cause blindness.

What causes cataracts in dogs?

Currently, surgical removal of the cataracts is the only means by which cataracts can be cured. Surgery is generally recommended when cataracts are causing vision impairment. Prior to performing surgery, a veterinary ophthalmologist will recommend performing both ocular and systemic diagnostic testing, including complete blood work, urinalysis, an ocular ultrasound and an electroretinogram, which tests the function of the retina.

Cataract surgery is performed under general anesthesia. Initially, a small incision is made in the cornea. Upon entering the eye, a circular hole (capsulorhexis) is made in the capsule of the lens. The cataract can now be accessed and removed with ultrasonic energy. Once all the cataract is removed, an artificial intraocular lens can be placed in the lens capsule. With the artificial lens, light can again be focused on the retina, and the dog’s vision will improve.

How successful is cataract surgery?

The success rate of uncomplicated cataract surgery with intraocular lens implantation in dogs is approximately 90 to 95 percent.

What are the risks and complications of cataract surgery?

Significant ocular complications include the following:

The patient is discharged the day after surgery wearing an Elizabethan collar (also known as an E-collar) to protect the eyes from self-trauma for approximately four weeks. The patient’s exercise should be limited during this recovery period. Topical medication will need to be administered four times daily for several weeks. The patient will also need to be re-evaluated by a veterinary ophthalmologist several times in the first year after surgery. Owners of dogs that have undergone cataract surgery commonly report a significant improvement in their pet’s quality of life.