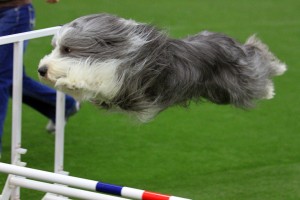 Blade was presented to the Orthopedic Division of the University’s Small Animal Surgical Service by his owner, Ms. Lori Weinberg. Blade, a 5-year-old bearded collie, goes by his official name, Camerons On The Cutting Edge, when he is competing. As it turns out, Blade is no ordinary dog, but rather a top-level athlete who specializes in the canine sport of agility. Performing in agility involves dogs being able to traverse a variety of complex obstacles with impressive speed and dexterity. To say Blade is very good in this highly competitive sport is an understatement. It’s closer to the truth to say that he is the best, as he was the AKC No. 1 Bearded Collie in agility for 2012 – a true champion. But one day in August, Blade suddenly became lame in his right rear limb which progressed in severity to the point where he was completely non-weight bearing on the limb over a 24-hour period. 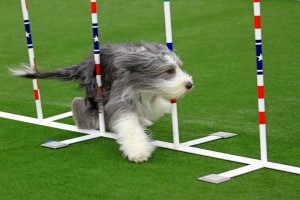 Blade’s veterinarian, Dr. Tia Simms, diagnosed him with an acute injury of his right ankle joint, also called the tibiotarsal joint or the hock. He had a tremendous amount of swelling around the distal-most aspect of his Achilles tendon and was tender to the touch in this area. Dr. Simms referred Blade to the Orthopedics service. Upon palpation, we were concerned he had torn the retinaculum, or stabilizing tissue of a specific tendon called the superficial digital flexor tendon of the Achilles. An ultrasound of this area revealed tremendous inflammation around the superficial digital flexor tendon where it passes over the heel bone, or calcaneus. With the owner’s permission, we took Blade to surgery and explored this area. There we found tearing of the fascia that helps to stabilize the tendon and interruption of the synovial bursa, or fluid padding that normally lives under the tendon as it runs over the calcaneus. We surgically repaired this delicate tissue and put Blade in a custom-made orthotic post-operatively. His activity was restricted for a month and a half with no training or off-leash activity. 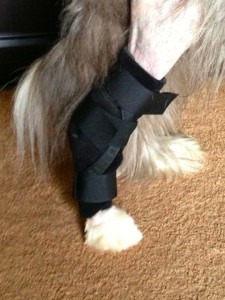 Six weeks after surgery, Blade’s incision had healed and he was fully weight bearing and comfortable once again. Blade’s owner was instructed to start gradually increasing his activity in anticipation of beginning his training once again. We now believe that the hard rotational forces generated through the hock joint during agility training or competition may have resulted in acute tearing of the synovial sheath of the calcaneal bursa resulting in severe bursitis. Once repaired, the inflammation subsided and his comfort increased dramatically. 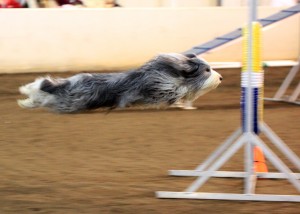 We fully anticipate Blade will return to competition in the near future and look forward to following his progress. 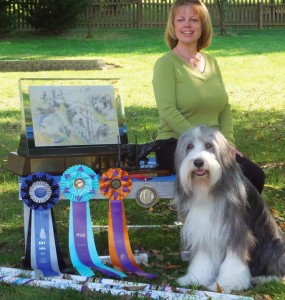 Thanks to Lori Weinberg, Blade, Dr. Simms and photographer Kevin Devine for allowing us to tell their story here. If you have questions regarding injuries that agility dogs can incur, please contact us.