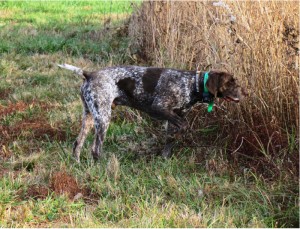 Bodie was presented to the University of Missouri Veterinary Health Center by his owners, Mr. and Mrs. Charles “Ward” Bond. Bodie is a 6-year-old male German shorthaired pointer, and his passion is upland bird hunting, more specifically pheasants! When the Bonds noticed that Bodie had lost weight, was acting lethargic and appeared to have some difficulty breathing, they had Bodie evaluated by his regular veterinarian, Dr. Jay Kirkpatrick. As part of Dr. Kirkpatrick’s diagnostics, radiographs (X-rays) of Bodie’s chest were performed, and a large mass was identified that appeared to be occupying a majority of the thoracic cavity. Dr. Kirkpatrick referred Bodie to the VMTH. Bodie presented through our Emergency Service where he was monitored and cared for overnight; his case was transferred to the General Soft Tissue Surgery division the following morning.

Before a surgical plan could be made, more advanced imaging was necessary. A CT scan of Bodie’s chest was performed to better define the origin of the mass as well as extent of the disease. 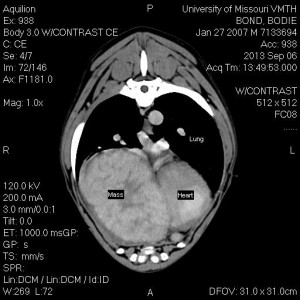 Once Bodie was in surgery, the mass was found to be occupying approximately 40 percent of his thoracic cavity, and it was adjacent to the heart, lungs and diaphragm. With gentle manipulation and dissection, the mass was removed without complications. Bodie remained in our Intensive Care Unit following surgery for very close monitoring.  Within 24 hours of surgery, Bodie was able to go for walks outside, which he greatly enjoyed because it allowed him to “hunt.” Bodie stayed in the hospital for a few more days following surgery, and by the time of discharge, it was a challenge to keep him calm! 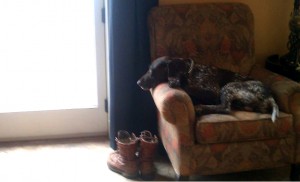 Bodie’s mass was thoroughly examined by a veterinary pathologist through our Veterinary Medical Diagnostic Laboratory. It was determined that the mass was NOT cancer, but rather, a large granuloma (collection of inflammatory cells) that included small areas of infection (abscesses). The most likely cause of Bodie’s large granuloma was a migrating foreign body, such as a grass seed. Hunting dogs such as Bodie are more prone to migrating foreign bodies, and the plant material is thought to gain access through inhalation or by becoming embedded between the toes. In Bodie’s case, it is speculated that the grass seed was inhaled into the nasal cavity during hunting, and then it traveled through the nasopharynx and trachea to gain access to the lower airways. From the lower airway, the foreign material could have migrated through the bronchial wall or lung parenchyma and lodged in the thoracic space where it created a local infection and inflammatory reaction. 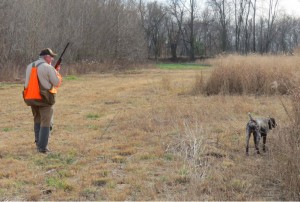 Bodie has made a successful recovery; he has gained weight and is back to doing what he loves most: hunting birds!